The faculty of Physical Education receives the delegation of South Sudan 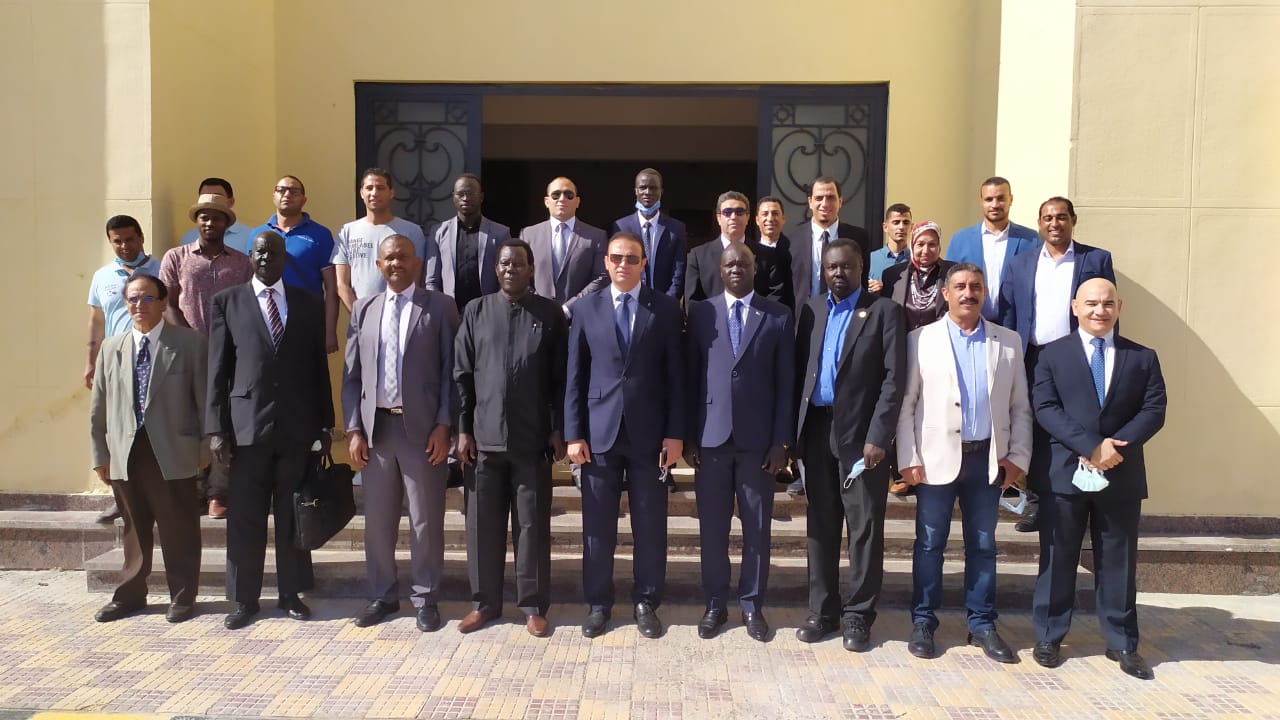 In light of Egypt’s interest in extending bridges of cooperation with the African side in order to enhance development, stability and construction, and under the patronage of Dr. Abdelaziz konsowa, President of Alexandria University, Dr. Mohamed Bilal, Dean of the Faculty of Physical Education in Abu Qir received, yesterday, the delegation of the State of South Sudan, headed by Mr. Gomaa Stephen , President of the Olympic Committee of the State of South Sudan, in the presence of faculty deputies and members of the college.
Bilal stated that the college is working to provide full support to its brothers in South Sudan, within the framework of activating the cooperation protocol signed by Dr. Abdel Aziz Qansouh, President of the University, and Dr. Albino Paul, Minister of Youth and Sports of South Sudan, last April, which included the establishment of a program A study for South Sudanese students at the Faculty of Physical Education at the undergraduate and postgraduate levels, explaining that the college receives graduate students of both sexes from all Arab and African countries. He also suggested the possibility of merging sports and other scientific fields and the possibility of a student studying in any field taking courses in the field of sports. He also indicated that the college would provide a student coordinator to overcome any obstacles facing international students during their studies, and announced the intention of the university and college to give a full scholarship, free of charge, to study a diploma and a master's degree, to any sports champion who wins an African or international medal.
Mr. Gomaa Stephen, President of the Olympic Committee of South Sudan and head of the delegation, expressed his sincere thanks and happiness for this cooperation between Egypt and the State of South Sudan, and expressed his gratitude for visiting the city of Alexandria for the first time, and considering this day a special day to visit an ancient and distinguished university at the level of Egypt and Africa .
Dr. Tong Chor, Secretary of the Olympic Committee, also praised Egypt's keenness to provide sports leaders, from the youth category, stressing the importance of qualifying women's cadres in the fields of sports, administration, training, as well as decision-making.
Michael Matayang, the Cultural Attaché at the Embassy of the State of South Sudan, also praised the interest of the Egyptian state in general, and the keenness of Alexandria University in particular on the existing cooperation between the two countries, stressing that making a good teacher is the primary goal on both sides, and that the Faculty of Physical Education Abu Qir has a leadership in this field. .
The visit included a presentation of the training program to be held for South Sudanese students at the bachelor's level, and a presentation of the training programs for South Sudanese students residing in Alexandria.