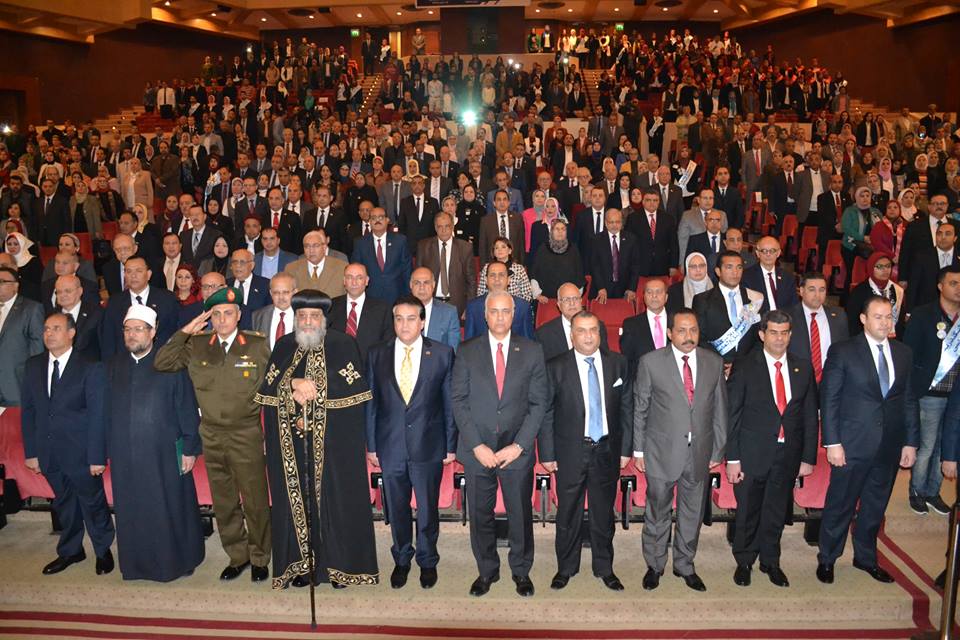 Alexandria University honored on Thursday, 21/12/2017 at the end of the events of the jubilee diamond a number of public figures, ministers, pioneers of science and art and a number of ambassadors and consuls of the countries and included the honor Sheikh Al-Azhar and Pope Twadros Baba Alexandria Ministers of Higher Education and Endowments and Commander of the North Military Region and a number of former ministers The governor of Alexandria and Matrouh, the president of the pharmaceutical company Farco and a number of university professors.

Dr. Khaled Abdel Ghaffar, Minister of Higher Education and Scientific Research, congratulated the Alexandria University's administration, professors, students and employees for their continued academic and societal excellence. He also stressed the role of universities in the lighthouse and the radiology center for knowledge and culture and achieving the aspirations of the Egyptian society in progress and development. And able to act and lead to others in all fields, referring to the role of the University of Enlightenment and culture, and stressed that the universities of Egypt able to achieve progress, including the strengths of the various components of their academic, technical and training He explained the importance of collaboration and coordination in efforts and the exchange of expertise, experience and openness to the corresponding academic institutions in developed countries and the importance of achieving progress in the development of Egypt.

The President of the University, Dr. Essam Al-Kordi, thanked the President of the Republic, Dr. Abdel-Fattah Al-Sisi, for his patronage of this celebration and his constant patronage of science and scientists. In addition to the role of the civil society in all fields, and referred to its leading national role in the revival of the Bibliotheca Alexandrina, thanks to Dr. Mustafa Al-Abbadi, professor at the Faculty of Arts and Dr. Lutfi Dawidar, former president of the University. Alexandria to private industrial society, and businessmen in support of the university in the implementation of its ambitious plan to develop its programs and scientific development of new colleges, and gave thanks for university graduates and businessmen who have contributed to bear the cost of this celebration.

The Minister of Awqaf, Dr. Mohammed Mukhtar Jumaa, stressed the importance of the role of universities in spreading culture and awareness, correcting misconceptions and building countries, and praised the interest of President Abdel Fattah al-Sisi in attracting young researchers and innovators to establish a special fund for the care of young innovators in recognition of the importance of science, scientists and scientific research.

Pope Twadros also delivered a speech in which he expressed his pride that he is a graduate of the Faculty of Pharmacy, Alexandria University, where he learned the keys to success in life - accuracy, order and the art of dealing with others.

Dr. Mohamed Sultan, governor of Alexandria, praised the work of Alexandria University to serve the society not only for Alexandria but for all of Egypt. He pointed out that it is the first expert house and the consulting office which provides all the assistance to the governorate in all projects carried out in the governorate.

On the sidelines of the celebration, the exhibition "Alexandria University in Tire" included a number of historical pictures about the University of Alexandria since its inception and so far and the most important activities and a number of innovations and projects of university students

Members of the House of Representatives, ambassadors, consuls of countries, art stars, businessmen, clerics, employees and students at the university